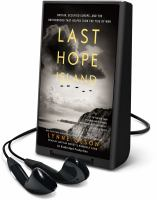 General Note
Release date supplied by publisher.
General Note
Issued on Playaway, a dedicated audio media player.
General Note
One set of earphones and one AAA battery required for listening.
Participants/Performers
Read by Arthur Morey & Kimberley Farr.
Description
"When the Nazi Blitzkrieg rolled over continental Europe in the early days of World War II, London became a refuge for the governments and armed forces of seven occupied nations that escaped there to continue the fight. As the only European democracy still holding out against Hitler, Britain became known to occupied countries as "Last Hope Island." Getting there, one young emigre declared, was "like getting to heaven." In this epic, character-driven narrative, acclaimed historian Lynne Olson takes us back to those perilous days when the British and their European guests joined forces to combat the mightiest military force in history. Here we meet the courageous King Haakon of Norway, whose distinctive "H7" monogram became a symbol of resistance to Nazi rule, and his fiery Dutch counterpart, Queen Wilhelmina, whose antifascist radio broadcasts rallied the spirits of her defeated people. Here, too, is the Earl of Suffolk, a swashbuckling British aristocrat whose rescue of two nuclear physicists from France helped make the Manhattan Project possible. Last Hope Island also recounts the crucial efforts of Polish pilots during the Battle of Britain; the vital role played by French and Polish code breakers in cracking the Enigma code; and the flood of top-secret intelligence about German operations -- gathered by spies throughout occupied Europe -- that helped ensure the success of the 1944 Allied invasion."--,Provided by publisher.