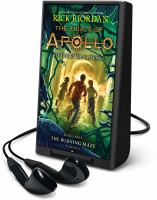 General Note
Title from container.
General Note
"HD."
General Note
"LIGHT."
General Note
"Listening Library."
General Note
Previously released by Penguin Random House LLC., ℗2018.
General Note
Release date supplied by publisher.
General Note
Issued on Playaway, a dedicated audio media player.
General Note
One set of earphones and one AAA battery required for listening.
Participants/Performers
Read by Robbie Daymond.
Description
"It's bad enough that my father, Zeus, turned me, the once divine Apollo, into a mortal teenager with acne, flab, and the unfortunate alias Lester Papadopoulos. On top of that, he has enslaved me to a pushy twelve-year-old named Meg, and he expects me to liberate five ancient Oracles from a trio of evil Roman emperors. (How, I ask you, when I have no godly powers?) So far, I've managed to restore two Oracles and receive a prophecy about "mazes dark," "lands of scorching death," and a "master of the swift white horse." Now Meg and I must journey through the Labyrinth, parts of which are venting hellfire, to find the third emperor. But is our cloven guide, Grover Underwood, up to the task? Are any of us? I have my suspicions about who the third emperor is ... a villainous tyrant I never wanted to run into again. Also -- and I haven't told my travel companions this -- I fear I'm growing weaker by the day. The longer I stay mortal, the less confident I am that I will ever be able to regain my place on Mount Olympus. It's time to call on Piper McLean and her boyfriend, Jason Grace, two of the seven demigods who sailed on the Argo II, to see if they will defeat the emperor and free the Oracle for me. Wait. Scratch that. I meant, of course, that they will help me do those things ... Yes, that's what I meant, Father. Really."--,Provided by publisher.