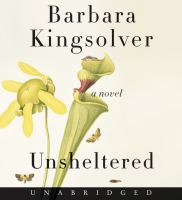 Willa Knox, a former magazine journalist, and her unemployed professor husband followed all the rules as responsible parents and professionals, and have nothing to show for it but debts and a house that is falling apart. Their dubious shelter is also the only option for a disabled father-in-law and an exasperating, free-spirited daughter.

In another century, in the same town, the local science teacher, Thatcher Greenwood, finds himself under siege when his employer forbids him to speak of the exciting work just published by Charles Darwin, and his young bride and social-climbing mother-in-law bristle at the risk of scandal. Thatcher wants to honor his duties, but perilous friendships threaten to draw him into a vendetta with the town's most powerful men.

With history as its canvas, Unsheltered paints a startlingly relevant portrait of life in precarious times, when the foundations of the past have failed to prepare us for the future.

General Note
Title from disc surface.
General Note
Compact discs.
Participants/Performers
Performed by Barbara Kingsolver.
Description
The story of two families, in two centuries, who live at the corner of Sixth and Plum, as they navigate the challenges of surviving a world in the throes of major cultural shifts. In this mesmerizing story told in alternating chapters, Willa and Thatcher come to realize that though the future is uncertain, even unnerving, shelter can be found in the bonds of kindred, whether family or friends, and in the strength of the human spirit.
Similar Series From NoveList
Similar Titles From NoveList
Similar Authors From NoveList
Borrower Reviews
Editorial Reviews
Published Reviews
Reviews from GoodReads
Loading GoodReads Reviews.
Citations
APA Citation (style guide)

Note! Citation formats are based on standards as of July 2010. Citations contain only title, author, edition, publisher, and year published. Citations should be used as a guideline and should be double checked for accuracy.
Staff View
Grouped Work ID:
50db919b-3c5a-37c8-ed76-a2a21c02041b
Go To GroupedWorkView in Staff Client