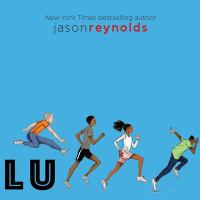 Lu must learn to leave his ego on the sidelines if he wants to finally connect with others in the climax to the New York Times bestselling and award-winning Track series from Jason Reynolds.

Ghost. Patina. Sunny. Lu. Four kids from wildly different backgrounds with personalities that are explosive when they clash. But they are also four kids chosen for an elite middle school track team-a team that could qualify them for the Junior Olympics if they can get their acts together. They all have a lot to lose, but they also have a lot to prove, not only to each other, but to themselves.

Lu is your quintessential pretty boy athlete, complete with fancy cleats, sunglasses, and a lot of attitude. The kind of guy you either hero-worship or want to PUNCH. He runs the most loved race-the 400 meter dash-and is crazy talented. He should be-he's been running track since he was small; because he's albino his parents got him involved in sports to help with his confidence. But it sort of backfired-now Lu has confidence to spare, and the swagger hasn't earned him any friends. As in none . Plus, his dad, who also shares his son's penchant for being flashy, has gotten caught up in some type of illegal activity. The Newbies on the team (Ghost, Patina, and Sunny) don't put up with Lu's shining around, but they also don't avoid him like everyone else does. They call him out on his BS, but include him in the horseplay. Will they be the first kids to crack through his armor and see more to him than the cloak of peacock that hides his lack of color?

General Note
Title from container.
General Note
Compact discs.
Participants/Performers
Read by Guy Lockard.
Description
Lu was born to be co-captain of the Defenders. Well, actually, he was born albino, but that's got nothing to do with being a track star. Lu has swagger, plus the talent to back it up. No one's going to outshine him. Lu knows he can lead Ghost, Patina, Sunny, and the team to victory at the championships, but it might not be as easy as it seems. Suddenly, there are hurdles in Lu's way, literally and not-so-literally, and Lu needs to figure out, fast, what winning the gold really means.
Similar Series From NoveList
Similar Titles From NoveList
Similar Authors From NoveList
Borrower Reviews
Editorial Reviews
Published Reviews
Reviews from GoodReads
Loading GoodReads Reviews.
Citations
APA Citation (style guide)

Note! Citation formats are based on standards as of July 2010. Citations contain only title, author, edition, publisher, and year published. Citations should be used as a guideline and should be double checked for accuracy.
Staff View
Grouped Work ID:
14bc3262-ab45-418b-fcaa-8d4ecb37d276
Go To GroupedWorkView in Staff Client