The fountains of silence
(Playaway) 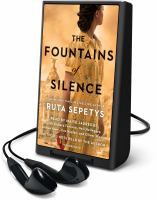 General Note
Title from Playaway label.
General Note
"Author's note read by the author"--Container.
General Note
"HD."
General Note
"Light."
General Note
"Listening Library."
General Note
Previously released by Penguin Random House LLC., ℗2019.
General Note
Release date supplied by publisher.
General Note
Issued on Playaway, a dedicated audio media player.
General Note
One set of earphones and one AAA battery required for listening.
Participants/Performers
Read by Maite Jauregui ; with Richard Ferrone, Neil Hellergers, Joshua Kane, Liza Kaplan, and Oliver Wyman.
Description
"Madrid, 1957. Under the oppressive dictatorship of General Francisco Franco, Spain is hiding a dark secret. Meanwhile, tourists and foreign businessmen flood into Spain under the promise of sunshine and wine. Among them is eighteen-year-old Daniel Matheson, the son of an oil tycoon, who arrives in Madrid hoping to connect with the country of his mother's birth. Photography introduces him to Ana, whose family's interweaving obstacles reveal the lingering grasp of the Spanish Civil War. Daniel's photographs leave him with uncomfortable questions amidst shadows of danger. He is backed into a corner of difficult decisions to protect those he loves. Lives and hearts collide, revealing a dark side to the sunny Spanish city. Ruta Sepetys once again shines light into one of history's darkest corners in this epic novel about identity, love, and the repercussions of war -- inspired by the true postwar struggles of Spain"--,Container cover.