Library account access and other online library services (eBooks, databases, etc.) will be unavailable on Saturday, December 3 for approximately six hours beginning at 5:15 PM while we perform system maintenance. We apologize for the inconvenience.

The Main Library is closed today, December 2, for an unexpected maintenance issue. 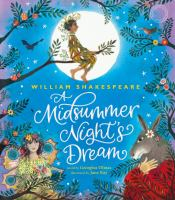 General Note
Book originally published: Somerville, Massachusetts : Candlewick Press, 2021.
General Note
"The permanently attached VOX Reader transforms an ordinary print book into an all-in-one read-along. There's no need for computers, tablets or CDs. Children simply push a button to listen and read"--Publisher's website.
General Note
VOX Audio playback device includes headphone jack, external speaker, play/pause button, volume controls, page-turning controls, rechargeable battery, low battery indicator, and removable AC adapter.
Participants/Performers
Read by Jonathan Myles.
Description
ABOUT WILLIAM SHAKESPEARE'S A MIDSUMMER NIGHT'S DREAM Retold for a picture book audience, the Bard's mischievous take on love run amok in fairyland meets its match in luminous illustrations by Jane Ray. If we shadows have offended, Think but this, and all is mended, That you have but slumber'd here . . . There's trouble in the Fairy Kingdom. King Oberon wants to teach Titania, his proud wife, a lesson. Things heat up when four young nobles arrive in the enchanted forest from Athens. They're all in love-but with the wrong person. It's up to Puck, a playful sprite who isn't above a bit of mischief after dark, to do his master's bidding, trick Queen Titania, and dial down the drama among foolish lovers. With a certain potion at his disposal, what could go wrong? Retold from Puck's point of view in simple, accessible language, peppered with quotes from Shakespeare's original play, and brought to life in Jane Ray's lush, moonlit illustrations, this introduction to the Bard's most enchanting comedy hints at the richness of his work while being a lovely keepsake edition in its own right.