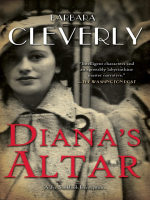 Description
Cambridge, 1933. On All Hallows' Eve, in a candlelit pew in ancient All Hallows Church, Doctor Adelaide Hartest witnesses a stranger's dying moments. Adelaide is just in time to hear his final confession: that he has plunged the dagger into his own chest, and that his death will be a suicide, despite its suspicious appearance.But his confession isn't enough to halt an investigation. The victim, it is revealed, is known to Scotland Yard, and his death is a matter of national concern. Assistant Commissioner Joe Sandilands is sent up from London to discover the truth. Thrown into a deadly ring of cloak-and-dagger intrigue and highsociety hedonism, Sandilands chases a phantom killer through Cambridge's aristocracy, intelligentsia, cutting-edge researchers, and a clandestine ring of female spies. What secret was the dead man hiding, and what is at stake?From the Hardcover edition.
Also in This Series