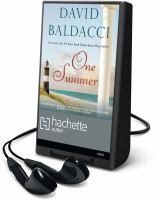 Description
When Jack Canfield is told he has a terminal illness and that he has weeks to live, his first concern is for his beloved wife, Lizzie, and children, baby Jack, Cory and rebellious teenager Mikki. On Christmas Eve, when Lizzie comes home, Jack is devastated to see his neighbour, Bill Miller, kiss Lizzie on their driveway. Jack confronts her, she tries to explain he's got it all wrong, and distraught, she leaves the house into an ice storm - and a fatal collision with a truck. Overwhelmed with grief, and with his illness worsening Jack is taken into a hospice. The children move to the West Coast to live with various members of the family. But then a miracle happens. Jack begins to recover, and day by day he starts to heal. Confounding the doctors, Jack leaves the hospital without any evidence of the illness. Unexpectedly the family inherits a beautiful old villa with a lighthouse on the beach in South Carolina. It was the house where Lizzie grew up and Jack feels an inexplicable closeness to her while he's there. Although his mother-in-law, Bonnie, has other ideas for their future, Jack knows that this is the chance he has to re-build his relationship with his kids. And as he struggles to reconnect with the children, he also has the chance to find love again, perhaps even with Lizzie's help.
Also in This Series

General Note
Title from Playaway label.
General Note
"HDAUDIO."
General Note
Release date supplied by publisher.
General Note
Previously released by Hachette Audio, p2011.
General Note
Issued on Playaway, a dedicated audio media player.
General Note
One set of earphones and one AAA battery required for playback.
General Note
"Scored with original music"--Container.
Creation/Production Credits
Original music by Freddie Khaw.
Participants/Performers
Read by Ron McLarty with Orlagh Cassidy.
Description
It's almost Christmas, but there is no joy in the house of terminally ill Jack and his family. With only a short time left to live, he spends his last days preparing to say good-bye to his devoted wife, Lizzie, and their three children. Then, unthinkably, tragedy strikes again: Lizzie is killed in a car accident. With no one able to care for them, the children are separated from one another and sent to live with family members around the country. Just when all seems lost, Jack begins to recover in a miraculous turn of events. He rises from what should have been his deathbed, determined to bring his fractured family back together. Struggling to rebuild their lives after Lizzie's death, he reunites everyone at Lizzie's childhood home on the oceanfront in South Carolina. And there, over one unforgettable summer, Jack begins to learn to love again, and he and his children learn how to become a family once more.
Similar Series From NoveList
Similar Titles From NoveList
Similar Authors From NoveList
Borrower Reviews
Editorial Reviews
Published Reviews
Reviews from GoodReads
Loading GoodReads Reviews.
Citations
APA Citation (style guide)

Note! Citation formats are based on standards as of July 2010. Citations contain only title, author, edition, publisher, and year published. Citations should be used as a guideline and should be double checked for accuracy.
Staff View
Grouped Work ID:
15407b05-3890-a4e0-187a-0cbcb75b66f4
Go To GroupedWorkView in Staff Client